You are here: Home / News / Hoegh was likely first Iowa governor to give a live televised speech

Governor Kim Reynolds plans to deliver a statewide address this  to unveil new pandemic-related policies — and it appears to be more than six decades since an Iowa governor has delivered a televised address at night. Leo Landis, the state curator at the State Historical Society of Iowa, found the details.

“Governor Leo Hoegh, at least in a local live address, appears in Fort Dodge to have made some remarks on television on October 12, 1956,” Landis says, “so that may be the very first time an Iowa governor appeared live on television.” 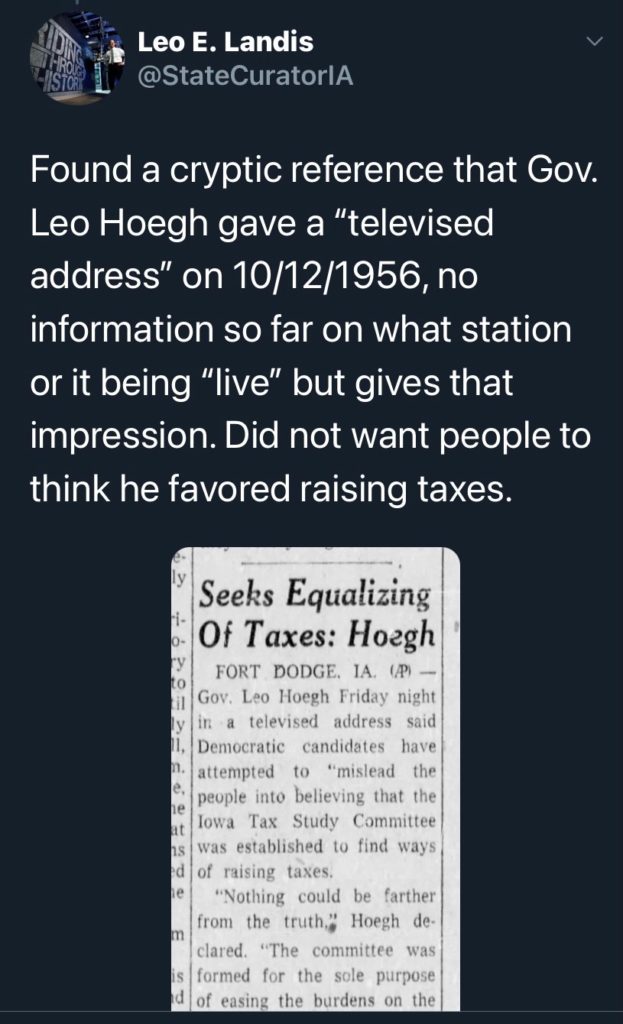 Hoegh was campaigning for re-election at the time and Landis found an Associated Press article about the nighttime speech.

“Fort Dodge did have a local NBC affiliate at the time, so it’s most likely that it was that NBC affiliate who carried those remarks,” Landis says. “…It was a live television address as best we can tell.”

However, it was likely a local broadcast because the technology to provide the signal statewide just didn’t exist.

“Even in the mid-1950s, television was still fairly new,” Landis says.

Many Iowa radio and TV stations intend to carry the speech Governor Reynolds intends to deliver tonight, shortly after six o’clock. It will originate from Iowa PBS.