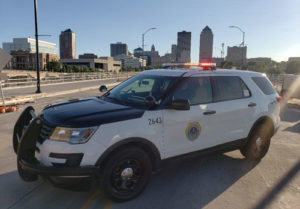 Des Moines police leaders are considering adjustments to how officers use force and manage crowds after large demonstrations were held this summer protesting police violence and racial injustice.

“To specifically say a goal of the policy is to minimize enforcement action,” Mandelbaum says, “and a goal or objective is to obtain voluntary compliance.”

Mandelbaum pushed the department to specifically rule out the use of “kettling,” where police block protesters into a confined area. Wingert says the policy states demonstrators should always have a way out, although it does not mention kettling by name.

The department’s policy instructs officers to use force only when it’s “objectively reasonable” to bring a situation under control.

Mandelbaum said the department should instruct officers to react differently to someone who’s not responding to their orders at all compared to someone resisting them verbally or violently. Chief Wingert said those situations are covered, even if they’re not spelled out.

“The reasonableness standard applies to all force,” Wingert says. “You’d have a 100-page policy if you tried to break down every incident where someone could get arrested.”

Des Moines police policy does not allow the use of chokeholds and officers are required to intervene if they witness a colleague using unreasonable force.