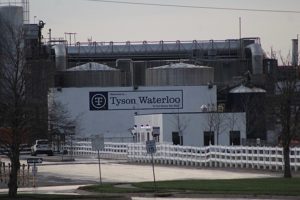 Tyson Foods has suspended the manager of its Waterloo plant who’s accused in a lawsuit of running a betting pool this spring on how many workers would get Covid.

Another manager who allegedly ordered sick workers to stay on the job has also been suspended. Tyson has hired former US Attorney General Eric Holder to investigate the allegations. Tyson’s CEO said in a statement that if the claims are true, the company will “take all measures necessary to root out and remove this disturbing behavior.”

The allegations were first reported by the Iowa Capital Dispatch. They come from a lawsuit filed by the family of a Waterloo plant employee who died of Covid in April.

The lawsuit alleges Tyson executives successfully lobbied Governor Reynolds to overrule local Black Hawk County officials who wanted to shut the plant down in April to contain the outbreak. Reynolds told reporters today she can’t comment on the lawsuit. Reynolds said her goal at the time was to keep the nation’s food supply chain moving.

“We know that we have to do everything we can in our power to make sure that we’re protecting our workforce and so in order to do that, the way that I could help from a state perspective, was to help get them the testing, which was very scarce at that time,” Reynolds said. “Every state across this country was scrambling to get tests.”

Reynolds said state inspectors were some of the first in the country to get inside a meatpacking plant to evaluate the safety situation for workers.

“We needed to figure out a way to work with these facilities to help provide them the information to protect their workforce,” Reynolds said, “so we stepped up and we did that.”

The leader of the United Food and Commercial Workers International Union says the allegations in the lawsuit “should outrage every American” and show Governor Reynolds and the Trump Administration care more about industry profits than front-line workers. Earlier this week Tyson reported doubling its net income in the latest quarter to nearly $700 million, while spending about $200 million on pandemic-related expenses.