You are here: Home / Sports / Former Iowa State assistant and head of Iowa Games dies at 75 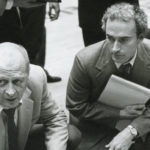 Jim Hallihan, former Iowa State assistant men’s basketball coach, who was a member of Johnny Orr’s staff for 12 years, died today. He was 75.

Hallihan, a native of Decatur, Ill., was Orr’s top assistant from 1982-94 and was elevated to associate head coach in 1993. During his tenure in Ames, the Cyclone men’s hoops program became a national player, earning six NCAA Tournament berths, including a Sweet Sixteen appearance in 1986.

After Orr’s retirement in 1994, Hallihan remained in Ames and served as Iowa Sports Foundation Executive Director for the Iowa Games. During his tenure, the foundation grew from two events and 16,000 athletes to over 20 events and 190,000 participants.