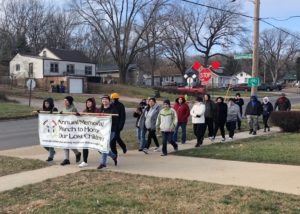 File photo from the Sioux City march in 2019.

Native Americans in Sioux City are following a tradition of honoring their children who’ve been placed into the non-Native foster care system.

One organizer, Manape LaMere, says people will need to wear face masks and social distance during the march on Wednesday.

“We definitely don’t want any consequences of COVID to come upon our gathering,” LaMere says, “so the leaders of the march have to ensure that we could take as much caution as possible.”

A spokesman for the Iowa Department of Human Services says 58 Native American children throughout Iowa have been placed into foster care since March when the pandemic began. More than half were placed with a relative or an adult known to the child.

LaMere says he wonders how the pandemic has affected these children as people cope with quarantine and their mental health.

“I can’t help but think what is really going on because of quarantines and because of all those hard things that are happening,” he says.

LaMere says they’ll stop four times during the march for prayers. Normally people eat a meal together at the end of the march. Instead, LaMere says food will be handed out to take home.