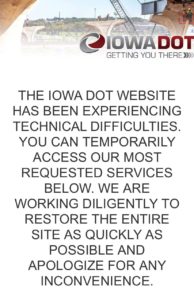 The Iowa DOT’s Andrea Henry says the private company that provides the online capacity for the agency’s website is dealing with a ransomware attack on its system.

“We utilize a hosting vendor and they have had a major outage,” she says, “so we have been working with them since last Monday to get that website restored.”

Henry says the data stored on the DOT’s website does not appear to be affected.

“We’ve been assured that there has been no compromise to any of our data, information or anything that lives on our website,” Henry says.

“However, we do have a temporary site at our usual address, which is www.iowadot.gov, and we’re able to connect you to some of the most time-sensitive services,” Henry says, “such as making appointments for drivers license services, online renewal, renewal of license plates and some motor carrier services as well.”

Henry says there’s also a chat feature on the website, to get other questions answered during normal business hours. It could be next week before the DOT’s website is fully functioning again.

“We are, of course, approaching the outage carefully to make sure that there’s no continued security concerns, so we’re hoping to have it up in the next day or two,” Henry says. “However, with the Thanksgiving holiday, it may continue into next week.”

According to news reports, Managed.com — the Iowa DOT’s web hosting company — shut down all its servers last Monday to prevent the malware from spreading to all it clients.