You are here: Home / News / A third of Iowa nursing homes have Covid outbreaks 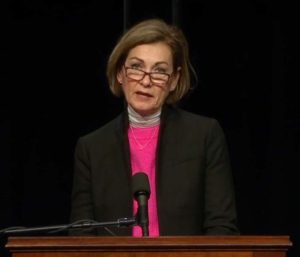 State officials report there are Covid outbreaks at 147 Iowa nursing homes, with 4,656 residents testing positive for the virus.

“While the numbers are increasing and the number of facilities are moving into outbreak status, it also gives us a heads up on how we can get in front of that and, hopefully, avoid some of the horrible outcomes that we know happen with this vulnerable population,” Reynolds said.

Statewide test results in the past week have confirmed more than 16,600 Iowans have the virus.

“While these numbers are not where we need them to be, they are lower than they were the week prior, when nearly 28,000 new cases and a positivity rate of more than 24% was reported,” Reynolds said today during a news conference at Iowa PBS.

About one in five of those who tested positive for Covid last week in Iowa were adults under the age of 30, but Reynolds said the infection rate is fairly well distributed among age groups. That’s what complicates the nursing home outbreaks, according to the governor and others, as the progressive spread of the virus in communities reaches into nursing homes.

“We’re continuing to look at the number of the tests to make sure that all of the facilities have the capacity to test,” Reynolds said.

Federal officials have recommended testing nursing home residents weekly, but that goal has not yet been met in Iowa. Five days ago, about one out of five Iowa nursing homes were listed on the state website as having outbreaks. Now, outbreaks are identified at one out of three.

“While it’s hard and we have more facilities moving into outbreak status, it also allows us to really identify a potential outbreak sooner rather than later,” Reynolds said, “and we can start isolating and making sure that we’re protecting the others that haven’t tested positive.”

Iowa nursing homes with a confirmed outbreak are able to request masks and other personal protective equipment from the state’s stockpile. Reynolds said state officials are working to train nursing home staff to ensure they are using the PPE appropriately. According to the state website tracking Covid-related data, more than a thousand Iowa nursing home residents have died after contracting the virus.