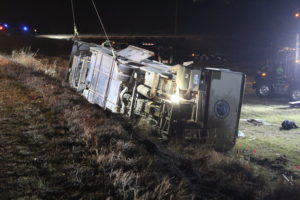 A recreational vehicle rolled off a northwest Iowa highway near Remsen on Thanksgiving evening, killing one person and injuring several others.

Preliminary information indicates that a 1998 motorhome was traveling north on county road L-12 when the driver failed to negotiate a curve, causing the vehicle to leave the roadway and rolled several times before coming to rest.

Several individuals were taken to Floyd Valley Healthcare in Le Mars, and one was airlifted to MercyOne in Sioux City. A 23-year old male subject was killed in the accident.

Names of the injured and the deceased will be released later on Friday, pending notification of family and friends.