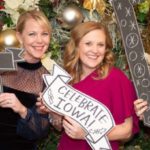 This year’s “Celebrate Iowa Gala” will be held online December 11 and organizers plan to showcase performances staged at some Iowa landmarks.

“We thought it was really important to go ahead and host the gala this year because Iowans this year, more than ever, really need something to celebrate,” says Iowa Department of Cultural Affairs director Chris Kramer.

A rockabilly band called “The Holy Rocka Rollaz” will perform from the Surf Ballroom in Clear Lake. The Brazilian 2wins (like “twins”) — touring brothers who’ve made Des Moines their home base for a decade — will perform with their violin and ukulele at the American Gothic House in Eldon. The Malvern Art Church will be the backdrop for a performance by guitarist Taylor Peek.

There will be a video tour of the Haitian art collection at Waterloo’s Center for the Arts and Iowa native Tom Arnold will lead a tour of the “Hollywood in the Heartland” exhibit at the State Historical Museum.

“We’re going to really take people on a fun and a celebratory trip across the state with lots of live performances and live interviews,” Kramer says, “just give them an evening to forget about everything that’s going on, relax and just enjoy learning about the state.”

The Donna Reed Center in Denison will be another stop on the video tour. Reed is the late actress, an Academy Award winner for her role in “From Here to Eternity” who starred with Jimmy Stewart in “It’s a Wonderful Life.” Her daughter Mary Ellen will be featured in the opening hour of next month’s Gala. Mary Ellen Reed be joined by a Broadway star who participated in one of the annual workshops for writers, directors and performers that used to be held in Denison.

Kramer says the 2020 Gala will give Iowans a virtual tour of the state’s cultural scene.

“People can relax in the comfort of their home and being safe at home this year is so important,” Kramer says.

This will be the 9th annual Celebrate Iowa Gala, with ticket sales going to the State Historical Society. The program on December 11 will start at 6 p.m., with some live performances from Denison. At 7 p.m., there will be what Kramer describes as a “showcase of Iowa culture.” At 8 p.m., there’ll be more live entertainment.

An all-access pass for all hours of the Gala is 250. Tickets for hour-long segments of the evening range from 25 to $100 each.