You are here: Home / News / Hart campaign suggests some legally cast votes yet to be counted 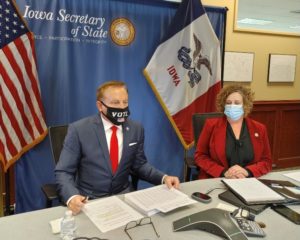 The State Board of Canvass has certified statewide results from this year’s election, including the race in Iowa’s second congressional district, which is the closest congressional contest in the country. Secretary of State Paul Pate, the state’s commissioner of elections, spoke during this afternoon’s brief meeting.

“All 24 counties conducted recounts of their votes and, in the final official tally, Mariannette Miller-Meeks defeated Rita Hart by 6 votes,” Pate said. “…That race alone reinforces that every vote counts and can make a difference.”

In a written statement, Hart’s campaign has suggested there are more legally cast ballots to count. A court challenge is likely to be filed this week, which could lead to another recount in the district.

“More than 1.7 million Iowans casting a ballot. Our turnout was nearly 76%, one of the highest in the nation,” Pate said. “More than a million Iowans voted absentee, which I think helped reduce the lines and crowds at the polls and helped slow the spread of Covid. And I want to put out a huge, ‘Thank you,’ to all Iowans and all our poll workers and our county election officials for their hard work and dedication.”

Every county in the state surpassed 65 percent turn-out, and some were far higher.