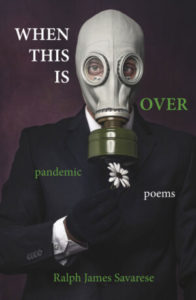 While 2020 was punctuated by the deadly pandemic, divisive politics, racial unrest and horrific weather, an Iowa City writer is releasing a book of three-dozen poems about the year which he says maintains a sense of optimism.

Ralph Savarese, an English professor at Grinnell College, says his fourth and latest book, “When This Is Over: Pandemic Poems,” is not — by any means — all worry beads and despair.

The book’s cover features a black-cloaked man wearing a full-face gas mask yet in his black-gloved hand is a blooming daisy.

While it’s been a year filled with sorrow and misfortune for many, Savarese says we’ve managed to carry on and look to a brighter future.

“There’s something to be said about resilience, about persistence, about learning to adapt to these new circumstances, wearing masks, washing our hands all of the time, limiting your exposure to other people,” Savarese says. “There’s something remarkable about the way human beings can adapt and still find a way to lead meaningful lives.”

The author has been wrestling with teaching his courses at Grinnell online, while facing an increased risk from COVID-19 due to his own health issues.

In addition, Savarese has been very worried about his mother who lives in a long-term care facility near Boston. She’s survived the challenging year, though 28 other residents at the home died from the virus and another 65 were infected.

“She is okay and it really is a sort of random miracle,” Savarese says. “Literally, people died all around her, across the hall, to the left, above her, below her. It’s not clear beyond some kind of extraordinary luck why she was spared.”

Topics of the poems are as varied as the year, including George Floyd, Tony Fauci, mask mandates and murder hornets. The book is available through North Liberty-based Ice Cube Press.