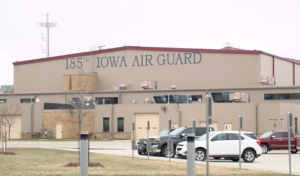 Sioux City’s 185th Iowa Air National Guard Air Refueling Wing is being awarded the Air Force Outstanding Unit Award for efforts during 2019. It’s the fourth year in a row the unit has earned the award.

“If we’re not able to man our organization in the necessary career fields, there are times our readiness might fall,” Samenus says. “Fortunately, here at the 185th, we have not been in that situation. We have a community that is very patriotic that supports the military and they continue to come to the 185th.”

During the 2019 evaluation period, the humanitarian efforts of the unit’s medical group were also highlighted. Samenus was in Puerto Rico where the 185th provided care — including eye exams and new glasses — to more than 9,000 people during a two-week exercise.

“One woman said it was the first time she was able to read a cook book so that she could make things for her family with this pair of glasses,” she says. “Our team loves to help others. That’s what we do in the military and across the island of Puerto Rico, we had more than 100 members from the 185th.”

During 2020, members of the 185th were part the natural disaster response, assisting with debris cleanup operations in Cedar Rapids following the derecho wind storm. Unit members were also active throughout the spring and summer months, providing support for the Test Iowa COVID-19 initiative.