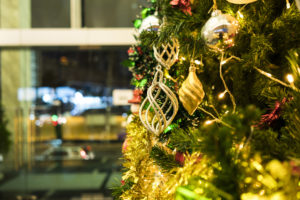 With the isolation of the pandemic, many Iowans decided to inject a little cheer into their lives by decorating their homes for Christmas — inside and out — well before Thanksgiving. Some Iowa Christmas tree farms report heavy sales.

“I’ve heard a lot of positive remarks from my growers and people that are out purchasing trees, that they’re excited to get going,” Pacovsky says. “A lot of them have decorated early. Everybody I’ve talked to says they’ve had a better season than they’ve had for a long time.”

The August 10th derecho swept across Iowa with winds up to 140-miles an hour, damaging or destroying tens of thousands of trees, but most evergreens were able to bend with the gusts and not break.

“A couple of the farms down by Cedar Rapids had a little damage but nothing that they can’t be open this year,” Pacovsky says. “They’ve still been able to maintain their trees and get back to their selling season.”

She says many Iowans have similar thoughts when heading to tree farms.

“The fir trees are the popular ones this year,” she says, “something that’s going to hold their needles and because of everybody putting them up early, they’re wanting to have a tree that’s going to last a while because we’ve got a good month or so to keep it up.”