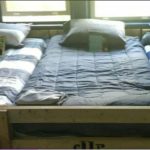 Beds made by the Jones County chapter of Sleep in Heavenly Peace.

Two eastern Iowa organizations that help others have been hit recently by thieves.

Someone broke into the storage shed of the Jones County chapter of Sleep in Heavenly Peace and stole thousands of dollars’ worth of items inside that are used to build beds for kids. Chapter president Heather and Nic Weers tell KCRG TV they’ve been asking themselves why someone would do such a thing.

“Boxes were thrown on the floor,” Heather said. “There were a lot of totes that were gone, tools missing. It was pretty upsetting.” Heather says they’ve given away more than 140 beds to local children in the last year and a half. The Weers said comforters, pillows, and around $8,000  worth of tools were taken. The chapter was still able to build 10 beds Sunday with volunteers from Anamosa FFA, like they had planned to do before the theft the day before, but only because the Delaware County chapter of Sleep in Heavenly Peace loaned them tools.

“It took a long time to raise the money to accumulate the funds to buy the supplies we have, and when you open up a garage door and it’s all gone, it’s pretty deflating because now you have to go through that whole process again,” Nic said.

The Jones County chapter of Sleep in Heavenly Peace isn’t the only eastern Iowa organization that reported valuable items stolen recently. At American Legion Post 45 in Manchester, Post Commander Larry Tibbott told KCRG TV someone took their grill in the last week. “It was a punch in the gut,” Tibbott said. “I like to think I’m not moved to tears that easy, but that one hurt. That really hurt.”

The grill is mainly used for the post’s monthly steak fry fundraisers, which have been put on hold during the pandemic in the hopes they can start again next spring. Tibbott said whoever stole the grill didn’t just take from veterans – they took from the whole community.

“The money that we raise from that goes toward our care for our veterans, our scholarship program for the school, the Boy Scouts, Little League, youth football,” he said. Tibbott said the custom-built grill is worth about 12-thousand dollars and covered by insurance. But he said it’s about the principle, of understanding who owned that grill and, even more, whom it helps. He asks whoever took the grill to park it in a parking lot someplace and call them — because the theft has an impact. “It’s going to be tough. It’s going to affect everybody.”

Anyone who knows who stole from these organizations is encouraged to call law enforcement – the Jones County Sheriff’s Office for the Sleep in Heavenly Peace storage shed theft (319-462-4371), and the Manchester Police Department for the American Legion grill theft (563-927-3355). People who wish to help the Jones County chapter of Sleep in Heavenly Peace by donating tools or money can contact Chapter President Heather Weers through email or the chapter’s Facebook page.