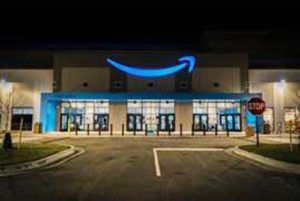 The massive new Amazon fulfillment center in central Iowa is ramping up to start handling packages.

Site leader Brent Hagan says they welcomed employees to the Bondurant center Sunday with company swag and pictures in a first-day company tradition. The center will eventually have 1,000 employees doing three main jobs.

He says this center just east of Des Moines can process around 950,000 packages a day and has 50 percent more capacity than other fulfillment centers. “And what that allows us to do is just to increase the amount of packages we are going to get to our customer base in one-day shipping,” according to Hagan. “So, we are really excited about the opportunities that that presents Iowans across the state.”

The building is massive — and you do need a map to know where you are going.
“It’s four floors, which a lot of people look at it from the outside and won’t realize that. It’s 640-thousand square feet but when you look at total square footage based on the four floors — you are really looking at almost two-million square feet,” he says. “So we do, we have an alphanumeric mapping that we teach everyone on day one.”

There’s also a special feature to try and keep everyone from getting lost. “About every six feet on our floors inside of these buildings you will see little circles with a two-dimensional person sitting on that floor — and in this building that person no matter where you are in the building faces south — which is the front of the building,” Hagan explains. “So you know as long as you find those people and head straight — you are going to the front of the building — so we try to make it as user friendly as we can.”

The training is underway and will work up to the first packages being shipped out.
He says they spend the first week doing the inbound launch — which is bringing inventory into the building. “And next week we’ll launch part of our outbound and start delivering packages –which we couldn’t be more excited about,” Hagan says.

As part of the opening celebration, the company donated $15,000 to the Bondurant-Farrar Community School District to provide technology that supports teaching and learning.

The company still has open jobs at the Bondurant fulfillment center and you can apply at: www.amzn.to/iowajobs  . The jobs have a minimum starting wage of 15 dollars an hour with benefits.