You are here: Home / News / Vilsack appears to be Biden’s pick to return as ag secretary 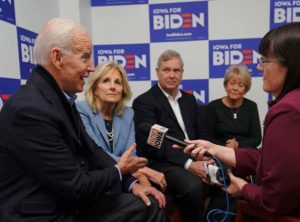 The Bidens and Vilsacks with Radio Iowa’s O.Kay Henderson.

It appears Tom Vilsack may serve longer as the nation’s ag secretary than he did as Iowa’s governor.

Several national media outlets are reporting Vilsack is Joe Biden’s choice to lead the U.S. Department of Agriculture. Vilsack served as ag secretary during all eight years of the Obama Administration.

Vilsack and his wife, Christie, have a long history with Biden. The couple backed Biden’s first abbreviated run for president in 1987.

About a year ago, the Vilsacks publicly endorsed Biden’s third bid for the White House. During an interview with Radio Iowa on the day of the endorsement, Biden was asked what role Vilsack might have in a Biden administration.

“Any one he wants,” Biden replied and the Vilsacks along with Jill Biden, who were also in the room, laughed, then Biden added, “but after Christie.”

Biden told Radio Iowa he consulted Vilsack on nearly every major assignment he was given as vice president during the Obama Administration.

“Everything I needed that was a really heavy lift, I went to Tom,” Biden said. “And whether or not Tom ever decides he wants to come back to Washington or not, I’m still going to be going to him…and the main reason is this guy’s character. Anything he says, he does.”

Vilsack, an attorney, served two terms as Iowa’s governor. The Biden transition team has not announced Vilsack will be nominated to serve again as ag secretary, but national news organizations cited sources familiar with the decision who spoke anonymously.