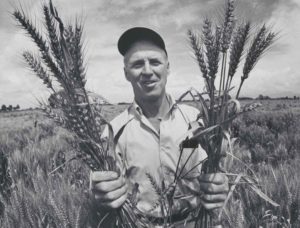 Fifty years ago this week, the groundbreaking work of a northeast Iowa farmer was recognized on the global stage as Norman Borlaug was awarded the Nobel Peace Prize.

“He’s actually credited with having saved over a billion lives, more than anyone else in human history,” Stinson says. “They didn’t have an agricultural prize so they awarded him the Peace Prize for his work in agriculture and reducing hunger, which brought much greater peace to the world, particularly in those areas.”

Borlaug developed a variety of wheat that was high-yield and disease-resistant, while devoting himself to agricultural development projects and the mobilization of food around the world. Stinson says, “The elements of this included bringing technology and improving water availability and getting technology to farmers and advocating farming practices that really created what’s called the Green Revolution.”

Once facing widespread starvation, Mexico became a net exporter of wheat by 1963, thanks to Borlaug’s work. Also, between 1965 and 1970, wheat yields nearly doubled in Pakistan and India, greatly improving the food security of those countries. In the mid-1980s, Borlaug pushed forward with an effort to establish a major prize for agriculture.

“Dr. Borlaug founded the World Food Prize Foundation to honor those that are improving the world’s food supply,” Stinson says, “but he was particularly interested in elevating these innovations to inspire other professionals and the younger generation.” The Des Moines-based foundation awards an annual prize with emphasizes the importance of a nutritious, sustainable food supply for everyone.

The award ceremony coincides each year with an international symposium addressing issues related to hunger and food security. Borlaug received his degrees in forestry, plant pathology, and genetics from the University of Minnesota, where an event is being held Thursday to mark the 50th anniversary of his winning the Nobel Prize. The event is called, “Nobel and Beyond: Building on the Legacy of a Hunger Fighter.”

“They are convening a very special gathering of alums and students and professors and many dignitaries to talk about the accomplishments of Dr. Norman Borlaug, his inspiration to the rest of the world, and in particular, his dedication to education and working with youth.”

In addition to winning the Nobel Peace Prize, Borlaug was also awarded the Presidential Medal of Freedom and the Congressional Gold Medal. He died in 2009 at age 95. Borlaug’s farm near Cresco is now a protected preserve that’s open for tours.