You are here: Home / News / Developers of Project FastPitch in Newton agree to higher tax assessment 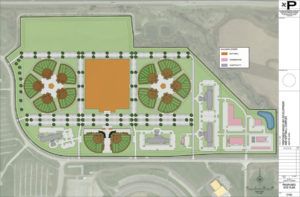 The Newton City Council has scheduled a hearing on December 21st to give the public a chance to comment on changes in the city’s agreement with “Project FastPitch” developers.

The $32 million dollar softball complex is planned for land just north of the Iowa Speedway.

“We are going to absolutely going to drive a ton of traffic to central Iowa over the course of the years,” says Troy Strawhecker of Premiere Development in Urbandale, which owns the land and is developing the project. “Youth sports is a very, very large business. A study that we read of the 26 youth sports that they measure, only nine of them are growing. The other ones are in decline. One of those nine is girls fast pitch softball and it’s growing at about 1.8% a year.”

Construction is to begin next year and the facility could be completed in as little as nine months. According to Strawhecker, the complex will host over 30 softball tournaments per year. Newton Mayor Mike Hansen says Newton’s investment years ago in improvements to accommodate the Iowa Speedway are why this project landed in Newton.

“There’s no doubt in my mind that Project FastPitch would not have happened here in Newton without all of the infrastructure that’s in place today,” he says.

Newton’s City Council will vote on amendments to its initial October, 2019 agreement with developers, amendments that would raise the minimum property tax assessment for the indoor and outdoor facilities that will be spread over 70 acres. Newton’s City Administrator says developers have finalized their financing and have agreed to a $25 million assessment beginning in January of 2022.