You are here: Home / News / Ernst says no matter how it’s done, a pandemic relief package must pass 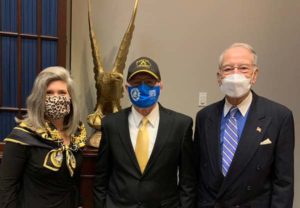 Iowa Senator Joni Ernst says it’s clear there’s a need for additional relief to individuals and businesses struggling financially during the pandemic, but Ernst is not yet signaling which plan that’s emerged she might support.

“We’ve heard a lot about the Covid relief package and the discussions that are ongoing,” Ernst says, “and I do continue to hear from Iowans as well on the importance of getting something done.”

The latest twist in negotiations came from the White House yesterday. President Trump’s treasury secretary unveiled a package that would provide a $600 direct payment to most Americans, but would not extend unemployment benefits. A bipartisan group of senators has developed a plan that would provide an extra $300 a week to unemployed Americans, plus send more federal aid to states, cities and counties.

Ernst is part of the GOP leadership team in the Senate, but she is not among the bipartisan group of senators working on that package.

“Regardless of how we end up getting this done, I do think it is important that we get this done,” Ernst says.

The Senate’s Republican leader has said the senate will not adjourn until a pandemic relief package has been enacted.