You are here: Home / Human Interest / Tonight is the best opportunity to see the Northern Lights 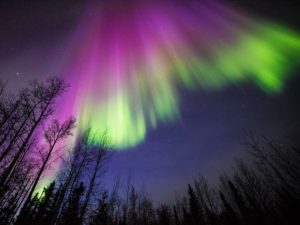 For Iowans who long to watch the fascinating swirls of green and purple waves of light in the sky, tonight will likely be your best opportunity.

A powerful solar flare is expected to push the famed Northern Lights further south into Iowa for a rare view. Meteorologist Andy Ervin, at the National Weather Service bureau in Davenport, says a storm front is forecast to arrive tomorrow.

“The only clear evening in Iowa the next three nights is this evening,” Ervin says. “We’re hoping that we can see the aurora borealis, generally in the northern part of the sky. You want to be out in the country, away from city lights.”

Locations from Washington state to Maine may be seeing the lights each of the next three nights, but clouds are expected over Iowa both Thursday and Friday nights. Ervin says if you can carve out a little time tonight to gaze skyward at the celestial spectacle, do.

“Look off to the north and we are potentially going to be seeing that after dark tonight,” he says. “Probably the middle of the night would be a great time to see that if you’re willing to stay up late. The forecast looks great tonight for a clear sky.”

A longtime Quad Cities resident, Ervin says he’s seen the Northern Lights before. “Living in this area, I’ve seen them a handful of times in my life and none of those times have ever been impressive,” Ervin says. “We’re just a little bit too far south to really have a good chance to see the things you see photos of on the internet and in National Geographic and things like that. Those gorgeous photos are often taken at higher latitudes.”

The Space Weather Prediction Center in Colorado says the geomagnetic storm will peak late tonight into early Thursday. The solar flare was recorded on Monday.