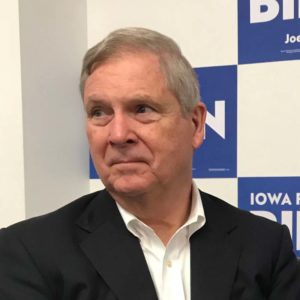 The speculation has turned to reality as former Iowa Governor Tom Vilsack was nominated by president-elect Joe Biden as the U.S. Secretary of Agriculture, a post Vilsack held during all eight years of the Obama administration.

Jeff Jorgenson, president of the Iowa Soybean Association, says Vilsack represents Midwestern agriculture well and he looks forward to working with him again. “As an Iowa farmer and even as a U.S. farmer, with Vilsack being in the system before, we kind of know where he stands on some issues and what we have in agriculture,” Jorgenson says. “We’re going to understand where we’re at in a lot of regards and sometimes that has some bonuses along with that.”

Vilsack was unanimously confirmed by the U.S. Senate eight years ago and is expected to easily win confirmation again in 2021, but Biden’s decision is drawing criticism from some quarters. Some environmental groups charge Vilsack is too closely tied to large-scale, corporate agriculture.

A coalition representing black farmers says Vilsack did not do enough as ag secretary to address racial inequities in access to loans for farmland.  Jorgenson says one of Vilsack’s main strengths is his knowledge and support of the ethanol and biodiesel industries.

“His understanding of regulations and biofuels and what we deal with as farmers and what we’re trying to get to as a country, I think he has a very good understanding of it,” Jorgenson says. “Really, he’s a very moderating voice. He knows how to get people to the table and work together and try to get through some differences and really move forward.”

Jorgenson says Vilsack knows the importance of trade and our key trading partners. “Vilsack has an understanding of China and he’s dealt with them a lot of years,” Jorgenson says. “He was CEO of the Dairy Council and he understands these exports and where we need to be international with trade. This opens him up for every product in agriculture and I think it’s a positive.”

Iowa Farm Bureau president Craig Hill says his organization is very pleased Vilsack has been chosen to once again lead the U.S.D.A. Hill says Vilsack has remained engaged in agriculture since his eight-year stint as U-S ag secretary four years ago and has a deep understanding of the struggles farmers face. Vilsack is a Democrat and he’s getting support from Iowa U.S. Senator Chuck Grassley, a Republican. In a statement on Tuesday, Grassley said: “I liked what Vilsack did as the secretary of agriculture for eight years and if he was in for another four years, it would be okay with me.”