You are here: Home / News / Finkenauer’s farewell focuses on value of public service 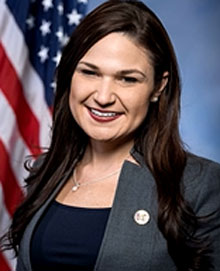 “These laws we passed and unfortunately on some occasions don’t pass because of stalemates aren’t just dollars and cents on a page. They are affecting people’s lives,” Finkenauer said. “I hope for this body and for the American people that we can have a congress and a senate who sees that and understands the value of public service.”

“I hope that young people across the country find their why and run. We need you. And when you get here, I hope you do the work,” Finkenauer said last night. “…It is about finding common ground where you can and just getting things done.”

Finkenauer lost her bid for a second term to Republican Ashley Hinson of Cedar Rapids. Hinson will be sworn into office, to represent Iowa’s first congressional district, in January.