You are here: Home / Human Interest / Iowa native named to astronaut team seeking a return to the moon 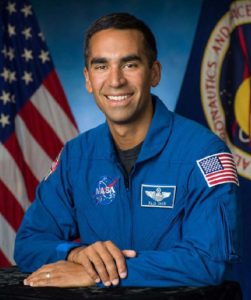 An Iowa native is chosen by NASA to be one of 18 astronauts on what’s being called the Artemis Team which aims to return to the Moon.

Forty-one-year-old Raja Chari grew up in Cedar Falls and has degrees in aeronautics and astronautics from the Air Force Academy and MIT. He’s a colonel and a test pilot for the Air Force and flew combat missions over Iraq.

In a 2017 Radio Iowa interview, Chari told how he was picked from among 18,000 applicants to be in that year’s class of 12 astronaut candidates, but was ordered to only share the secret with his immediate family.

“I was able to call my wife and that’s when there was screaming on her end and I was still in my office with all of the folks right outside the door,” Chari says, laughing. “I had to just do a little happy dance in place. It was about all I could do at the time to not totally give everything away.” Chari’s wife, Holly, is a Cedar Falls native and they have three children. Chari graduated from Waterloo Columbus High School in 1995 before heading to the academy.

He admits he hasn’t always dreamed of becoming an astronaut but learning to fly was one of his early goals, along with studying science. “Right around eighth grade, we got a new science lab and new science tables in that lab and that was a very big deal to an eighth-grader,” Chari says. “I distinctly remember, ‘Now we can do all kinds of cool things in there.’ We dissected frogs and other activities that we now have this science lab for and that really sparked my interest.”

Chari’s father came to the U.S. from India to get his master’s degree and spent his entire career at John Deere in Waterloo. “My father came to the country with the goal of getting an education and realizing the importance of that and that directly translated to how I was brought up,” Chari says. “There was a focus throughout my childhood on education and that being the thing you really needed to do well to succeed.”

The Artemis Team consists of nine men and nine women — and the name Artemis may be familiar. In Greek mythology, Artemis is the twin sister of Apollo, which was the name of the American space program that first landed on the Moon in 1969. In the 2017 interview, Chari said he was excited at the prospects of rocketing into orbit and perhaps — going well beyond.

“We’ll do International Space Station systems training, we’ll do robotics training, spacewalk training, and then Russian training,” Chari says. “Those are the major subsets that we’ll work on over the next two years. Once you’re done with that, then you’re in the mission assignment cue and I’m excited to see what the possibilities are. I’ll be happy to do whatever they need me to do.”

He’s piloted all sort of aircraft and has helped in developing America’s newest fighter, the F-35. With the space shuttle fleet long since retired, the prospects of being the first to pilot a completely new spacecraft into orbit are a thrill for Chari: “I wouldn’t say daunted so much as excited.”

Chari will join a shortlist of seven other Iowa natives who’ve been in orbit, including the state’s first astronaut, Walter Cunningham of Creston who flew aboard Apollo 7. Iowa’s other six astronauts all served during the shuttle era: Peggy Whitson of Mount Ayr, Jim Kelly of Burlington, George Nelson of Charles City, Loren Shriver of Jefferson, David Hilmers of Clinton, and Laurel Clark of Ames, who died in the Columbia tragedy of 2003.