You are here: Home / News / Snow on the way for the weekend 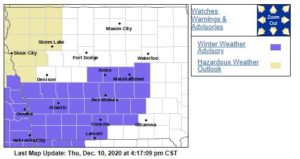 The temperatures in the 60s we enjoyed today are going to be pushed out by a storm that will bring cold and snow.

National Weather Service Meteorologist, Alex Krull, says the most snow will fall south of Highway 20. “We are expecting anywhere between two to four inches of snow. That band will range from southwest Iowa Through central Iowa — including the Des Moines metro — and then up through Marshalltown and into the Cedar Rapids metro,” Krull says. “And then northwest and southeast of that line — snow amounts will be a little bit less.”

He expects the snow to start falling in the early afternoon. “Probably between one and two p-m. But the heavy accumulations of snow will not begin until later in the evening after 7 p-m on Friday, and then accumulation snow will continue overnight into Saturday morning,” according to Krull.

Cold winds will accompany the snow, but Krull says it probably won’t be blowing a lot. “It kind of will be more of a heavier, wetter snow. The wind gust that we have forecast with this are anywhere between 15 to 20 miles-an-hour. So the winds will be a little bit breezy, but not extremely blustery,” he says. “So, visibility could go down to about a mile — but this won’t necessarily be the worst blowing snow that you’ll ever see here in Iowa.”

Krull says to be prepared for winter driving conditions. “There will be some travel impacts associated with this snowfall. And for several locations across Iowa this will likely be the first time that folks will commute or make a drive in snowfall this winter season,” Krull says. “It’s always good to remember if you can’t see the road very well and your visibility is reduced — turn on your headlights and slow down and leave plenty of space between you and the other vehicles.”

Krull says the last major snowfall in the central Iowa area came in a rare occurrence back on October 19th — when a snow squall” dropped as much as nine inches.