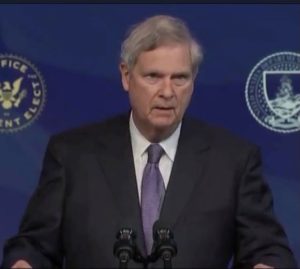 President-elect Joe Biden says he had to do a bit of persuading to convince former Iowa Governor Tom Vilsack to agree to serve again as the U.S. Secretary of Agriculture.

Biden introduced Vilsack and four other members of his domestic policy team today, three of whom served in the Obama Administration. “They bring deep experience and bold new thinking. Above all, they know how government can and should work for all Americans,” Biden said. “For secretary of agriculture, I nominate Tom Vilsack, an outstanding two-term governor of Iowa, the best secretary of agriculture I believe this country has ever had.”

Vilsack is the only member of Obama’s cabinet to serve all eight years in the same role.

“He wasn’t anxious to come back. He wasn’t looking for this job, but I was persistent,” Biden said, with a laugh, “and I asked him to serve again in this role because he knows the U.S.D.A. inside and out. He knows the government inside and out. We need that experience now.”

Biden credited Vilsack for leading feeding programs and other U.S.D.A. initiatives to lead the nation out of the Great Recession and he said the U.S.D.A. has a critical role in the pandemic as studies indicate hunger is an issue for at least one in four American children.

“Mr. president-elect, madam vice president-elect, I’m honored by the trust that you’ve placed in me to return to the vital work of the U.S.D.A. at a very critical moment for so many families and communities throughout America,” Vilsack said.

Vilsack, who’ll turn 70 on Sunday, said he feels enormously lucky and grateful for the opportunities he’s had in life.

“Thinking back on the path of my life, where it began in an orphanage in Pittsburg, Pennsylvania, to Iowa where my incredible wife Christie and I raised our family…to standing here today being given a chance to serve our country again today,” Vilsack said, “but unfortunately and tragically not all have experienced those possibilities, so I consider it my duty and my responsibility to expand those possibilities to all at the U.S.D.A.”

Vilsack promised to assemble a diverse and inclusive leadership team at the agency. A coalition representing Black farmers has criticized Biden’s decision to have Vilsack return to the U.S.D.A., charging Vilsack did not do enough as ag secretary to address racial inequities in loans for farmland.

Before Biden introduced Vilsack today, he promised his administration would have a national, coordinated strategy to defeat the pandemic. Vilsack, during his remarks, said one of his first tasks will be guiding the department’s pandemic response.

“Reviving rural communities and economies,” he said, “addressing dire food shortages and getting workers and producers the relief they need to hang and to come back stronger.”

Vilsack has been president and CEO of the U.S. Dairy Export Council since February of 2017.