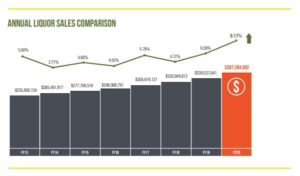 The state agency that distributes liquor says the fiscal that ended in July saw around an eight percent increase in sales compared to last year.

Iowa Alcoholic Beverages Division spokesman, Jake Holmes says that’s better than they’ve seen in recent years. He says the trend has been around four to five percent in the last five years — although there was a six percent increase last year. Sales in the fiscal year were  $367.3 million and more than $133 million was transferred to the state general fund. Holmes says this is something that’s been seen in liquor sales across the country.

“The trend in rising sales isn’t specific to Iowa — especially during the pandemic — it appears more people are consuming during this time,” Holmes says. The number of liquor licenses approved in the fiscal year was down — which is another indication people are buying the booze and taking it home to drink. “It does seem like specifically with some of the restrictions that those on-premises establishments had over the last part of the fiscal year — it is pretty safe to conclude that not only were people not only consuming more — but were consuming at home rather than at on-premises establishments,” Holmes says.

IABD had reported earlier that sales went up 18% in March after bars and restaurants were shut down by the pandemic emergency order. The bars were allowed to reopen in the spring.

Holmes says the shutdown did come at a time that is not during the peak months of alcohol sales. “Typically October, November, December, that’s the busy time generally,” according to Holmes. “Recently we’ve seen more kind of spikes in other areas of the year with those special events and things that typically happen in the summer, there is an increase there too.”

The increase in sales more than offset a deferment of taxes and fees the governor ordered that resulted in decreases in license and tax revenue. Those fees were deferred until the end of December.