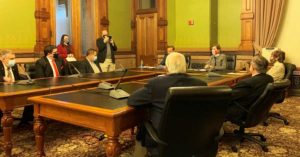 Iowa’s Electors with the Governor.

Six Iowans have cast their votes in the Electoral College for President Donald Trump and Vice President Mike Pence.

Trump finished eight points ahead of Joe Biden in Iowa and carried all but six of Iowa’s 99 counties. Governor Kim Reynolds was on hand this morning to greet the Electors at the State Capitol.

“Turn out for the General Election was incredibly high in the State of Iowa and I think that’s something we can all be very proud of,” she said.

Turnout in Iowa was over 76% for the November election. Secretary of State Paul Pate administered an oath to the six Electors and formally announced the outcome of the presidential election in Iowa.

“897,672 Iowans voted for Donald Trump for president and Mike Pence for vice president…Those votes were technically and legally votes cast for the six of you,” Pate said. “…I want to congratulate you, the Electors, and thank you for your service.”

David Chung of Cedar Rapids is a long-time Republican Party activist, but this was the first time he’s served as an Elector.

“It’s a tremendous honor,” he told Radio Iowa. “There’s only 538 in the whole country.”

Thad Nearmyer of Monroe was the elector representing the second congressional district.

“I’ve never done it before,” he told Radio Iowa “Somebody asked me to do it and I did it.”

The U.S. House and Senate will meet in a joint session on January 6th to officially count the 538 Electoral College votes that were cast today.