You are here: Home / Fires/Accidents/Disasters / Fires damage businesses in Cedar Falls and Waterloo 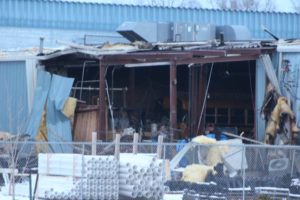 Investigators are trying to find the cause of a pair of northeast business fires, which broke out Monday afternoon in the neighboring cities of Waterloo and Cedar Falls.

According to witnesses, both fires began with an explosion. The Waterloo fire broke out around 1 p.m. and heavily damaged School Bus Sales. Waterloo Fire Rescue officials say the blast blew out a wall.

When they arrived, firefighters found a school bus burning inside the building. Four people were taken by private vehicles to local hospitals to be treated for unknown injuries. 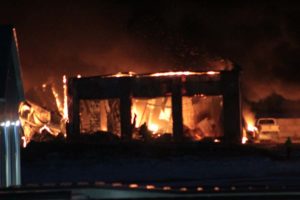 The Cedar Falls fire, which broke out around 4:30 p.m., destroyed Beyer Motorsports, an auto and truck repair business.

The fire immediately engulfed the company’s large garage, which eventually collapsed in the inferno. Company officials say everyone inside the building escaped the structure safely.

Smoke from the fire could be seen for several miles.