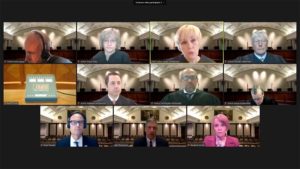 The Iowa Supreme Court heard arguments today in a case where the state is asking that a lawsuit by environmental groups that challenge the strategy for handling farm runoff into the Raccoon River be dismissed.

A district court allowed the lawsuit to proceed. Iowa Citizens for Community Improvement attorney, Brent Newell, argues the Nutrient Reduction Strategy the state put in place does not protect the ability to use the river for recreation and drinking water.

Newell says they are arguing this voluntary relief should be declared unconstitutional. “We also seek injunctive relief ordering the state to adopt a mandatory plan. Now that relief as the district court held, does not specify what acts the legislature must do — but it must abandon the voluntary approach and go to this affirmative obligation to protect public use — which is the law of this state,” Newell says.

Justice Brent Appel asked if the lawsuit was too broad. “It’s really a complex problem caused by all kinds of things. And you are really kind of screaming for a solution — but one that isn’t rifled and framed — and amounts to more of a statement of policy than a request for a remedy,” Appell says.

Solicitor General Jeffrey Thompson spoke for the state and says the regulation of farming is one of the most important and difficult tasks the state has.  “That is also true of the regulation of the impact of agriculture on our environment and specifically

our waters,” Thompson says. “The policy determinations — the balancing of interests that relates to that challenge is something our Consitution puts in the hands of the legislature and the executives.”

He says the state is taking action to address the issue. “The Nutrient Reduction Strategy that was embraced by Senate File 512 is not a do-nothing policy — it just doesn’t directly regulate non-source runoff. But it is replete with all kinds of reporting and funding incentives,” Thompson says.

Thompson asked the Supreme Court to overturn the district court ruling and dismiss the lawsuit.  The court will issue a ruling at a later date.