You are here: Home / News / Salvation Army sees increased demand while holiday donations are down 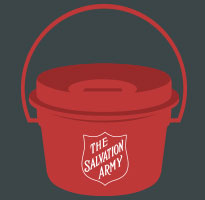 Leaders of the Salvation Army in Iowa say donations to red kettles are down at a time when demand for the agency’s services are peaking.

Shalla Ashworth, a spokeswoman for the Cedar Rapids chapter, says there’s no actual winter storm bearing down on Iowa right now, but there’s been a perfect storm of disasters this year.

“Between the pandemic and then the derecho that hit most of Iowa, getting volunteers involved, getting people who are comfortable being out, we knew this year was going to be a challenge,” Ashworth says. “We have seen a lower number of bell ringers, we’ve seen a lower amount of money in the kettles, also, more people are shopping online or they’re doing pickup.”

The August 10th derecho swept across all of Iowa but the winds were worst in Cedar Rapids, topping off at 140-miles-an hour. Damage there was widespread and demand for Salvation Army services is still spiking, what she calls a “tsunami of need.”

“We are seeing record numbers of folks that are in need, especially here in the Cedar Rapids area,” Ashworth says. “We were already hit by the pandemic and then the derecho – it hit everybody in the community. Folks who have never maybe been in this situation before are reaching out to us saying, ‘We need a little help!’”

Donations at red kettles across Linn County are down by more than $50,000 compared to last year and additional volunteers are needed to ring the bells. “This is our last weekend of bell ringing, so we’d like to see all of the spots filled, and then we’d love to have every spot filled on Christmas Eve,” Ashworth says. “We ring 10 a.m. to 8 p.m. every day except Sunday, and then on Christmas Eve, we only ring until 4 o’clock.”

The Salvation Army chapter in Sioux Falls, South Dakota, reports receiving a diamond ring in one of its kettles a few days ago, but Ashworth says they’ve seen nothing unusual plunked in their kettles this season.

“Not that we have seen this year,” Ashworth says. “Last year, we had a couple of rings and some older coins dropped in, but this year it’s been pretty quiet for the unique things. Hopefully, maybe in these last few days, we’ll get one of those unique items put in our kettle.”

Volunteering to be a bell ringer anywhere in Iowa is easy. Simply log on to “RegisterToRing.com” and plug in your ZIP code and it’ll show you the nearest place where bell ringers are needed.

Donations are also being accepted at the Salvation Army website.