You are here: Home / News / Warmer temperatures moving into the state 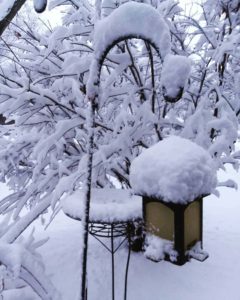 Forecasters say warmer weather is wafting into Iowa today which should bring some melting of the snow from last weekend’s winter blast — though the odds for a White Christmas remain good.

Meteorologist Alex Krull, at the National Weather Service, says it isn’t exactly a heatwave, but it’ll be almost balmy compared to the chilly weather of the past week. “We have winds coming from the south which will help bring in warmer air, compared to the last couple of days,” Krull says. “Temperatures in southern Iowa today will likely be reaching the lower 40s and far northern Iowa will be reaching the upper 30s, that’s five to seven degrees warmer than we’ve been the past couple of days.”

The forecast calls for the chance of more snow across Iowa’s eastern half late tonight and early tomorrow. “For tonight, there is the possibility for some mixed winter precip, it could be a mix of snow, maybe some freezing rain and freezing drizzle,” Krull says. “Right now, most of that is looking to be east of Interstate 35 and that would be after 7 p.m. and maybe during the early morning hours on Saturday, but with anything that occurs tonight, we’re not expecting any accumulation.”

No troubles are expected with travel overnight, he says, outside of wet roadways. It’s expected to get cooler again next week and should stay on the cold side through next weekend, including Christmas Eve and Christmas Day. “We are expecting a change in temperatures and a cooler pattern, so we’ll be seeing high temperatures probably only reach the upper 20s for most of central Iowa on Christmas Day,” Krull says. “The snow that we had from this past weekend will likely still be on the ground — a little bit — but in terms of fresh snowfall, nothing is expected right now for Christmas Day.”

Much of the state’s midsection was blanketed last weekend, with the deepest snow being reported in central Iowa, with five to seven inches, and in northeast Iowa between Dubuque and Maquoketa with eight to nine inches