You are here: Home / News / Feenstra calling for House investigation of 2020 presidential election 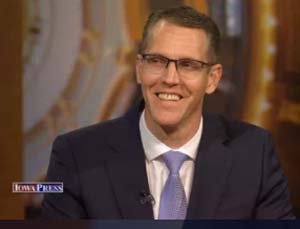 “If you really look at the circumstance and this is the first time ever in our country that we have ever had mail-in ballot predominantly,” Feenstra says, “so I think we all want to make sure protect what we have and there’s still some litigation out there and, for me, all right, let’s make sure that litigation is done and let’s move forward.”

State officials certified Feenstra as the winner of Iowa’s fourth district congressional race three weeks ago. Last week, the Electoral College certified Biden as the winner of the presidency, but Feenstra is one of 26 in-coming House Republicans asking House Speaker Nancy Pelosi to launch an investigation of voter fraud in the 2020 election.

Feenstra cites this fall’s court rulings in Iowa which invalidated absentee ballot request forms containing voter information that had been mailed out by Woodbury, Linn and Johnson County Auditors.

“We had to take them to court and say, ‘Hey, wait a minute the law is the law. You can’t do this.’ They wanted to put their thumb on the scale,” Feenstra says. “And I look at that and say: ‘We saw this in Iowa. What is happening around the rest of the country? And that’s why every one of us, because of what we have in our representative democracy, this cornerstone of our elections, that we have to protect it with everything that we have and make sure it’s fair and balanced.”

In another election-related matter, Feenstra does not support an investigation of Iowa’s second congressional district, where Republican Mariannette Miller-Meeks of Ottumwa was certified as the winner by a six vote margin. Democrat Rita Hart has indicated she’ll ask the U.S. House to launch an investigation, which could trigger another recount in the race.

“That’s scary for our electoral process and the foundation of what we believe in, in a democracy,” Feenstra says.

Feenstra made his comments during this weekend’s “Iowa Press” program on Iowa PBS.