You are here: Home / Sports / Iowa’s Nixon is Outland finalist 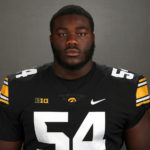 Iowa junior defensive lineman Daviyon Nixon has been named one of three finalists for the 2020 Outland Trophy, the Football Writers Association of America (FWAA) announced Tuesday. The Outland Trophy is presented to the nation’s best interior lineman on offense or defense.

Tristan Wirfs was a semifinalist for the award last season. Four Hawkeyes have won the Outland Trophy in school history: Brandon Scherff (2014), Robert Gallery (2003), Alex Karras (1957), and Cal Jones (1955). Only three programs in the nation have more Outland Trophy recipients than the Hawkeyes.

Nixon, a Kenosha, Wisconsin, native, was named the Nagurski-Woodson Defensive Player of the Year and the Smith-Brown Defensive Lineman of the Year in the Big Ten last week. He leads the Big Ten in tackles for loss (33), tied for the conference lead in sacks (5.5), and has the most tackles by a Big Ten defensive lineman (41).