You are here: Home / Outdoors / Licenses now on sale for paddlefish in western Iowa 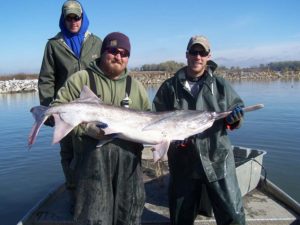 Paddlefish licenses for the Missouri and Big Sioux Rivers are now on sale. (DNR photo)

Licenses are now on sale for one of the more unique fish you can catch in Iowa. You can buy a license for paddlefish on the Missouri and Big Sioux River for the season that opens in February.

Regional Fisheries Supervisor, Chris Larson, says interest in the paddlefish season has been up and down since the first year when it became legal again. “Nine-hundred-and-50 licenses are available to residents and 50 to nonresidents. We sold around 740 resident and 50 non-resident licenses in 2015. And then it dropped to about 400 per year…and then in 2020 it really kind of fell off so only 215 licenses were sold,” Larson says.

He says the high water on the river could be the reason for the drop off last year. He hopes the increase in the sale of other DNR licenses during the pandemic will carry over to paddlefish. “I hope so, you know water levels are down with the drought we’ve been in for about a half a year now. So, river levels are down and that’ll concentrate those paddlefish behind those wing dikes where they like to hang out in the wintertime even more,” Larson says. “Barring any big snowstorms and a lot of winter runoff — we should have a pretty good year.” 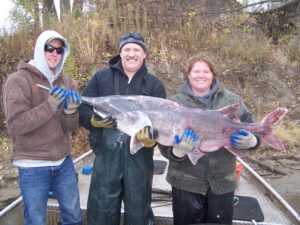 Paddlefish over 45 inches can be kept. (DNR photo)

While the number of licenses purchased last year were down — he says those who did get a license had success. Larson says they send out a survey and more than 50% of those who responded said they got a fish. He says there are a lot of reasons to try catching a paddlefish.

“Paddlefish meat is very, very good, people consider it a delicacy, so they are very tasty,” according to Larson. “It is also an opportunity to harvest a very large fish. The state record paddlefish is over 100 pounds. We do see quite a few fish that come in over the slot length limit that you can’t keep kind of to protect that breeding population. So if it is less than 35 inches you can keep it and if it is over 45 inches you can keep it — so anything from 35 to 45 to have to release.”

The paddlefishing method is also something different as it involves snagging the fish. “It’s an active type of fishing — you are not just sitting there waiting for something to bite — you are actually physically pulling up on a pretty large pole with some pretty good weight on it,” Larson says. The licenses are sold through January 7th.

A resident license sells for 25-50 and you must also have a valid Iowa fishing license. For more information, go to the
DNR website.