You are here: Home / Agriculture / Scientists work to save farm-friendly bats from deadly disease 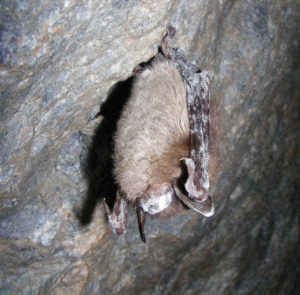 Researchers are making progress in trying to combat what’s known as white-nose syndrome, which has killed many thousands of bats in Iowa and millions across the continent.

Jeremy Coleman, the national white-nose syndrome coordinator for the U.S. Fish and Wildlife Service, says scientists are working to create an aerosol spray to genetically silence the fungus that causes the disease without hurting the bats.

“We would use what’s called RNA interference to silence genes within the fungal pathogen and reduce the severity of the disease on bats,” Coleman says. “Any tool that would come from that is pretty far off, at this point. This is just the initial stab at getting a look at that technology.”

Some native bat species are being pushed the brink of extinction by the disease and Coleman says bats are very important to agriculture, as they eat tons of insects that harm crops. He says researchers are also working on a vaccine that would put a halt to white-nose syndrome in bats.

“They wouldn’t have to be injected. What we’re looking at is an oral vaccine,” Coleman says. “They could consume the vaccine and share it within a site. The benefit of that is, we don’t have to treat them while they’re in hibernation. We would treat them when they’re still in the maternity colonies and then they would take the vaccine, ingest it and take the benefits of that back into hibernation with them.”

White-nose syndrome, which was first discovered in the U-S in 2007, is killing up to 90-percent of the bats in some colonies. Bats are critical pest controllers and in the U.S. alone, Coleman says bats save farmers at least $3.7 billion per year in pest control services, a figure he says is conservative.

“They are the primary consumer of night-flying insects and there are a number of crop pests and human pests that bats consume nightly,” Coleman says. “With the disease spreading, that’s resulting in tons of insects that are now not being consumed and that have to be addressed with pesticide.”

Due to the drastic reduction in native bat populations, he says millions of insects are feeding on trees and crops, which can impact forestry, agriculture and human health. White-nose syndrome is caused by a fungus which can look like white fuzz on bats’ muzzles and wings. The fungus thrives in cold, damp places and infects bats during hibernation. It’s confirmed in Iowa and 34 other states as well as seven Canadian provinces.