You are here: Home / News / A decade in the making, all-Iowa feature film is released on iTunes today 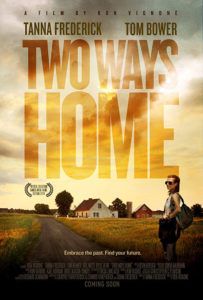 A feel-good independent film shot entirely in Iowa with an all-Iowa cast and crew is being released today on iTunes. “Two Ways Home” has been a decade in the making and would have premiered on big screens earlier this year but for the pandemic.

Actress and Mason City native Tanna Frederick has the lead role in the 90-minute movie and she’s thrilled it’s finally going to be available to audiences everywhere.

“We were able to make a distribution deal with the film because there’s a lot of films that aren’t being made right now and going into production,” Frederick says, “so there’s a need for films to be dropped in the bucket over the holiday season.”

The feature film is winning major accolades on the virtual film festival circuit, including several Best Picture honors. Frederick portrays a woman with bi-polar disorder who faces a series of personal challenges as she returns to the family farm.

Frederick’s name appears at least three times in the credits, including as lead actress, co-writer of the screenplay, and as producer. It’s been a very personal project, she says, and it was a big disappointment to repeatedly cancel screenings in Iowa due to COVID-19. “Two Ways Home” premiered in June of 2019 at Hollywood’s famed Chinese Theater. She vows the film -will- have its big-screen premiere in Iowa — at North Iowa Area Community College in Mason City during 2021.

“We’re going to be rescheduling that when everything settles down and we can figure out how to get everybody seated in that 2,000-seat theater at NIACC,” Frederick says, “and proceeds are all going to be going to the mental health facilities at NIACC.”

Filming started on the movie in 2011 and the young actress who played Frederick’s 13-year-old daughter in the film is now a realtor in Des Moines. “Rylie Behr is now all grown up and she’s not just in college, she’s graduated and it’s kind of a joke, you can’t even recognize her,” Frederick says, laughing, “as she’s turned into this fabulous young woman who’s selling houses now.”

The original story was written by Iowan Richard Schinnow and filming locations include Forest City, Garner and Mason City.

Frederick, who was valedictorian of her graduating class at the University of Iowa in 1999, co-founded the Iowa Independent Film Festival and launched “Project Cornlight” in 2011 to develop Iowa-based films showcasing in-state talent.