You are here: Home / News / Snowfall may help in abnormally dry, drought-stricken areas of Iowa

Two-thirds of Iowa counties are considered to be abnormally dry or in some stage of drought, with far northwest Iowa the driest of all. State Climatologist Justin Glisan says that makes this month’s snowfall particularly welcome.

“We had precipitation deficits starting to stack up in western Iowa, especially west central Iowa, going back last fall and then drying creeping into much of western Iowa moving into April, May and especially June, where we saw drought conditions expand across western Iowa,” Glisan says. 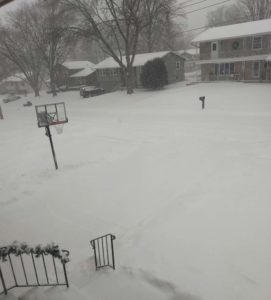 The lack of adequate subsoil moisture is a remarkable turn-around after recording flooding just a couple of years ago in several areas.

Having snow drifts stick around for a while would be a good thing, according to Glisan, because it may help replenish moisture levels.

“But of course drier soils freeze faster and they’ll freeze deeper,” Glisan says, “so we don’t want a really deep freeze in the subsoil because that will act like a concrete layer, no water infiltration getting into that deeper soil.”

The National Weather Service forecasts indicate more than half a foot of snow may fall in some areas of the state today (Tuesday).