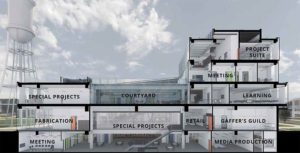 An ISU diagram of the Student Innovation Center.

Iowa State University President Wendy Wintersteen recently spoke at a national forum held by the national “Council on Competitiveness” on the role higher education is playing in helping the country be more competitive.

The national council released a report with recommendations on how innovation can make the country more competitive in the world. “We’ve been talking about it and doing it for decades — but now is a time for renewed emphasis in the nation — and that is what the report of the council really calls for,” according to Wintersteen.

Wintersteen says innovation is something they have been stressing more on the Ames campus. “Over the last decade or so, our undergraduate students have seen that this is an opportunity for them as well. To learn what it means to have a start-up — to take a new enterprise home to the family farm,” Wintersteen explains. Iowa State opened a 140,000 square foot “Student Innovation Center” on campus in August of this year. Wintersteen says it provides the students with unique facilities and workspaces to foster innovation. She thinks it makes an impact on their student experience.

“I think it changes their mindset — whether they’re going to go ahead and take a job with a company after they graduate — I think they have a different mindset for what it means to be an innovator within that company,” she says. “Again it might be a student who chooses when they graduate to be a part of a start-up.”

Wintersteen says they are able to teach students about several aspects relating to innovation. “We have a number of courses across the university we have majors in entrepreneurship and a minor as well,” Wintersteen says. “And in these courses, and in the hands-on projects that students conduct, they learn what it means to fail.”

Wintersteen says the lessons from failure are important. “How they look at failure, how they think about it as a way to grow. They are taught about the finances and how that works. They are taught about the ethics of being involved in the business,” according to Wintersteen. And she says this college experience is the safest way to learn the lessons of failure and will hopefully lead to more success once they graduate.