You are here: Home / News / Middle and eastern side of state get heaviest amounts of snow 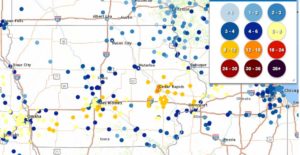 Snowblowers and snowplows will be busy again today as the work to clear streets, parking lots, and sidewalks continues after the storm Tuesday dumped a lot of snow on the state.

National Weather Service meteorologist, Kristy Carter, at the Johnson office says there was one total that will go in the books.
“There was a record at the Des Moine Airport of nine-point six inches,” she says.

Des Moines was the midpoint of the heavy snow band that started one side of the state and went border to border. Carter says the snow went from the very southwest corner through central Iowa and then east. She says saw snows of nine inches to the south of Des Moines and five to six inches north and then nine to ten inches south and west of Des Moines.

The snow really got heavy as it hit eastern Iowa. “In more of east-central Iowa heading toward the Davenport area, they were more in the ten and 11-inch range,” Carter says. There were reports of 12 inches in Hiwatha and Fairfax in eastern Iowa.
Carter says the predictions prior to the storm were accurate.

“I think the forecast turned out pretty well for the totals that we saw — some areas may have certainly gotten a little more — but I think the general forecast worked out really well,” according to Carter. Another storm is expected to move through Friday and Carter says it could bring snow or rain.