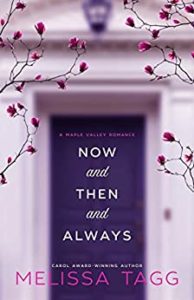 A romance novel written by a central Iowa author is being recognized with a national award.

Melissa Tagg’s book is called, “Now and Then and Always,” and it’s receiving the Christy Award. Tagg, who lives in Webster City, says it’s a wonderful honor.

“It’s an award that’s given annually for inspirational fiction,” Tagg says. “They usually do a gala in Nashville to announce it but this year, of course, due to the pandemic, it was a virtual ceremony.”

The Christy Award has been issued each year since 1999. It’s named after the best-seller “Christy” that was first published in 1967 by Catherine Marshall.

Tagg is thrilled her book was singled out for the 2020 award.

“It’s the first book in a series, set in a fictional town called Maple Valley which I slightly based off of Webster City,” she says.

The second book in that romance series, “Some Bright Someday,” was released in mid-November. Both are for sale at Amazon.com.