You are here: Home / News / Steve King blasts GOP hierarchy, not ruling out another run for office 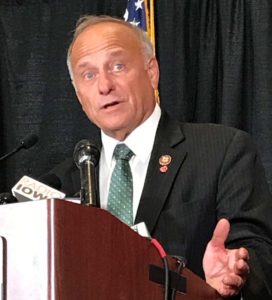 Republican Congressman Steve King says he plans to stay active in the country’s political debates once his ninth term in the U.S. House ends at noon on Sunday and the 71-year-old is not ruling out another run for public office.

“After 24 of public service in the middle of the heart of all of these important issues, there’s a lot of these accumulated experiences that I just can’t let go to waste,” King told Radio Iowa. “I want to make sure that they’re available and that I can help people.”

King served six years in the Iowa legislature before winning his first race for the U.S. House in 2002. He narrowly won re-election in 2018, then was defeated by fellow Republican Randy Feenstra in the G-O-P Primary this past June. Feenstra will take King’s seat in congress on Sunday.

King said you “never say never” and he’s not ruling out running for some other office or endorsing a presidential candidate before the 2020 Iowa Caucuses.

“We see what happens when the elitists and the globalists and the never Trumpers band together,” King said, “and how they pull this policy away from the principles that restore the pillars of American exceptionalism.”

King has written a book titled “Walking Through the Fire” and he announced this fall that it would be released in November.

“That’s my frustration is that the publisher that I had…I let him go because — I’ll just put it this way — he was all hat and no cattle and so now I’m on the cusp of making and reaching another agreement,” King said. “I don’t know that I can predict when the book will be out, but I want to make sure we get this right.”

Once the book is published, King plans to embark on a publicity tour. King was not in Washington this past Monday when the U.S. House voted to override the president’s veto and to endorse sending two-thousand dollar federal stimulus payments to most every American. King said he had a cold and it did not seem wise to fly.

“Imagine sitting on a plane, coughing and blowing your nose and having them call for an emergency landing because they diagnose you with Covid,” King said. “It’s just a cold, but I looked at that and thought I’d still take the chance, but I knew the results of both of those votes and so I that’s why I didn’t go to Washington.”

King, in one of his final acts in the U.S. House, filed a 20-page ethics complaint against House Republican Leader Kevin McCarthy — a protest of McCarthy’s 2019 decision to strip King of his committee assignments. King said a search of House records by congressional staff suggests every other member of the U.S. House who’s been tossed off committees either switched parties, was under some sort of investigation or had been convicted of a crime.