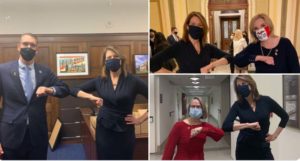 Axnee tweeted thise picture of the other members of the delegation.

Congresswoman Cindy Axne will host the first joint meeting of Iowa’s U.S. House delegation and their D.C. staffs this afternoon.

Axne, who just started her second term in Congress, is the dean of the delegation. She spoke briefly Sunday to the other three Iowans who are all starting their first term.

“Although it’s a Democratic House majority and I’m a Democrat, we have to work together,” Axne told Radio Iowa. “…I literally said to my new colleagues, who are all Republicans, I will need you with me to chase the speaker down because that is what we did last term.”

Axne said that kind of a full-court press with House Speaker Nany Pelosi as well as committee leaders is how she and now-former colleagues Abby Finkenauer and Dave Loebsack were able to do things like secure federal assistance for flood victims in Axne’s southwest Iowa district.

“When you come from a state like Iowa with four representatives and you’re competing for resources…against states like California with 40 representatives, we have to work together,” Axne said, “and we have to be working with the majority, even as Republicans, if we want to get anything done for the people that we care about.”

Axne said the Iowa delegation also has an opportunity for bipartisan work with the executive branch, as President-elect Biden has made it clear he’s interested in rural policy to “ensure that we bring opportunity to every zip code in this country, so there’s a lot of things from rural health care, of course, to agriculture to economic development for small town Main Streets that I think we could come together on.”

Congressman Randy Feenstra, a Republican from Hull, hopes to land a seat on the House Agriculture Committee where he said there’s an opportunity for Republicans and Democrats to work together.

“I look forward to working with Congresswoman Axne, who sits on the ag committee right now,” Feenstra said during a December appearance on Iowa PBS, “and we can get a lot of things done.”

Congresswoman Ashley Hinson, a Republican from Marion, said she is open to having conversations with any of her new colleagues, including Axne.

“I think what people want is they want us to come together on the issues we agree on as much as possible and so that’s what I want to do in the minority is work on those issues things we have that common ground on,” Hinson said during an early December Iowa PBS appearance.

Axne said she’s encouraged by the conversations she’s already had Hinson, Feenstra, and Mariannette Miller-Meeks, who was provisionally seated this week as Iowa’s second district congresswoman.

“We’re going to do everything we can to try and work together,” Axne said, “and I hope that pans out.”

All four Iowans have offices in the Longworth House Office Building in Washington, D.C, but none have meeting space large enough to accommodate the members and staff who’ll participate in today’s meeting, so it will be held over Zoom.