You are here: Home / News / Iowa’s governor says ‘a lot of questions’ remain about presidential election 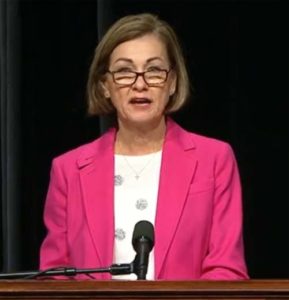 Republican Governor Kim Reynolds is condemning those who stormed the U.S. Capitol and “chose to incite violence” yesterday.

“It’s unacceptable and they should be prosecuted to the fullest extent,” Reynolds said. “That’s not how we resolve our differences in the greatest nation on Earth and it absolutely is not who we are as Americans.”

But Reynolds today said there are “a lot of questions” about whether the 2020 presidential election was “transparent, strict and fair.”

“We can still move forward in a peaceful transition and figure out some way to responsibly take a look,” Reynolds said. “…We shouldn’t be afraid of answering those questions, of asking those questions and you know it has to be self-evident…Americans can’t be told: ‘It is.’ They have to believe it.”

Reynolds made her comments in an opening statement at a legislative forum sponsored by the Iowa Capitol Press Association.