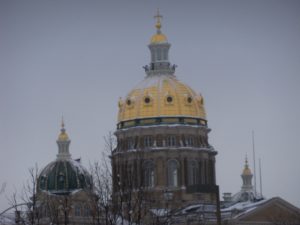 The Republican leaders in the Iowa legislature say they’re confident in the security at the Capitol building in Des Moines. Senate Majority Leader Jack Whitver of Ankeny said Wednesday’s attack on the U.S. Capitol was a sad day for the country.

“This is a great country that has given me so much and given all of us so much, allowed me to grow up in Grinnell, go play football at Iowa State, become a state senator,” Whitver said. “…Violence like that should never stand and should always be condemned.”

House Speaker Pat Grassley of New Hartford said Americans have every right to express their opinions, in a non-violent way.

There were protests in June outside the 135-year-old Iowa Capitol building when the legislature was in session.

“Between the security, we have inside the Capitol and the State Patrol as well, I think that we’re well equipped,” Grassleys said. “Some of what we saw in June, if it were to be anything like that, kind of prepared us and we know what steps may need to happen.”

Whitver said the “small group of people” who protested in the U.S. Capitol do not speak for Iowa Republicans.

“Part of the reason we’ve been successful here in Iowa with our elections in the House, in the Senate, with the governor is because we focused on Iowa and we focused on what we need to do to make Iowa the best state we can,” Whitver said, “and that’s what we’re going to continue to do.”

The lawmakers made their comments during the taping of “Iowa Press” which airs tonight at 7:30 on Iowa PBS.