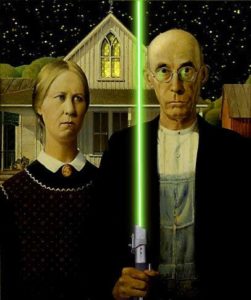 A new exhibit opens this week at the Cedar Rapids Museum of Art featuring some of the many parodies of the painting “American Gothic.”

The most famous work by Cedar Rapids native Grant Wood is considered the second-most parodied painting in the world, behind only the Mona Lisa. Museum curator Kate Kunau says the exhibit is called “Seriously Funny: American Gothic Parodies.”

“There are around 23 physical objects in the exhibition,” Kunau says. “It’s all basically what we would call ephemera, so it’s magazine covers, greeting cards, political cartoons from newspapers. Obviously, people have sent those to us over the years and we’ve amassed quite a collection of them.”

There are also some 65 digital parodies scrolling on flat screens which depict alternatives to the familiar bespectacled farmer with a pitchfork beside the dowdy woman. While Wood created American Gothic in 1930, its long-running impact on popular culture has been astounding, she says, as the painting has been the subject of near-constant parodies throughout much of its 90-year history.

“There’s a Dick Ruhl painting of Donald and Daisy Duck in the American Gothic poses from 1944 but it’s really been in the American consciousness since it was painted,” Kunau says. “This is a really cool way to celebrate the longevity of Wood’s art and how this iconic piece is still really relevant in our society today.” 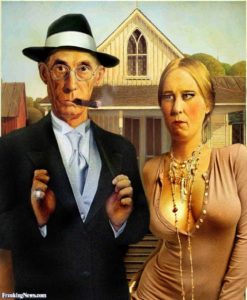 The exhibit includes the Gothic duo in such diverse disguises as Jedi knights from “Star Wars,” as political figures like Bill and Hillary Clinton, as Kermit the Frog and Miss Piggy, and even in the black-and-white face paint of a longtime rock band. 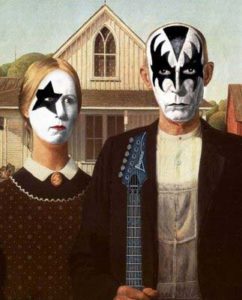 “KISS is fantastic, I love that one,” Kunau says. “I’m a big fan of ‘Calvin and Hobbes’ and there’s one that shows them as the cartoon Calvin and Hobbes. There’s one where they’re from ‘Shrek.’ One of my favorite art history ones is where the woman was turned into Vermeer’s ‘Girl with the Pearl Earring’ and the man is a portrait of Vincent Van Gogh, which I really love.”

The original American Gothic remains at the Art Institute of Chicago, though it’s visited the Cedar Rapids museum several times. The CRMA has the largest collection of Wood’s work of any institution, public or private, in the world. The exhibit opens Saturday.