You are here: Home / Sports / Iowa State’s Foster to miss remainder of the season 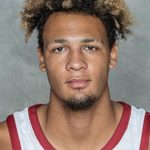 Iowa State freshman Xavier Foster will miss the remainder of the season after electing to have surgery on his right foot to address an injury that was suffered in high school.

“Xavier has battled this injury for a while now and we fully support his decision to have surgery,” ISU head coach Steve Prohm said. “He tried to play through it, but it became clear that the best thing for his future was to have this surgery and work toward getting him healthy.”

The surgery is expected to sideline Foster for 8-12 weeks.