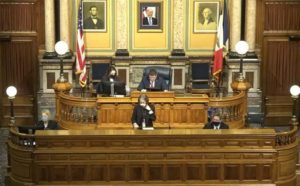 Opening day speeches at the Iowa legislature are typically congenial, with bipartisan cooperation as a common theme. That was not the case today.

House Democratic Leader Todd Prichard of Charles City said as a 25-year Army veteran he was outraged by what happened in the U.S. Capitol last Wednesday.

“I spent a tour in Iraq and I know an insurgency when I see one,” said Prichard, who spent 15 months in Iraq during one of his four deployments.

“As an elected leader, I am disgusted at the reaction or rather the inaction of some and many of my Republican colleagues here in Iowa,” Prichard said. “For too long, politicians have not only enabled, but served as a willing partner in the spread of misinformation about election fraud.”

And Prichard, in his first speech on the House floor this year, named names.

Prichard also criticized Republican Representative Dean Fisher of Montour for a now-deleted Facebook post suggesting Republicans would prevail because, in Fisher’s words, “our side has the guns and the other side doesn’t know which bathroom to use.”

“Leader Prichard, violence and anarchy of any kind is unacceptable. It doesn’t matter what the political ideology is and let me, as the majority leader of the Iowa House, stand here today and say: ‘I denounce it, whether it was what happened in D.C. or the riots that happened over the summer,’ so you’ve got a leader standing here saying: ‘It’s not ok,'” Windschitl said, to applause.

Our state and country are going through “extremely unprecedented times,” according to Windschitl.

“We must lead by example and show Iowans that, despite political differences, we can work together for the betterment of those we serve,” Windschitl said. “…When we see injustices, let us all call them out together, put partisan ideologies aside and move forward towards a solution.”

There was an increased presence of law enforcement officers inside and outside the statehouse today. A few hundred protesters gathered inside the Capitol this morning to raise their objections to mask mandates and vaccines.

The attack on the U.S. Capitol was on the mind of another lawmaker who had a speaking role s the 2021 legislative session began this morning. Senator Ken Rozenboom, a Republican from Oskaloosa, delivered the opening prayer in the Senate chamber.

“As a nation, America’s flaws are evident to all…We pray that you will send healing to our land,” Rozenboom said. “…The very nature of the work we do here demands that we represent differing views…Bless each one here with clarity of mind…temperance of tongue…and always tethered to the truth.”

“We should all be proud that congress was undaunted by the attack and continued the peaceful transition of power,” Wahls said.

“I think this is a small group of people that went and acted and I don’t think they speak for Republicans in general,” Whitver said on Iowa PBS, “and certainly doesn’t speak to what we want to do as an agenda.”

Wahls also used his opening day speech to call for creation of an independent commission to investigate the state’s response to the pandemic.

“The Covid Commission should help us understand state government mistakes and failures, investigate negligence or profiteering in the private sector,” Wahls said, “and prepare a report for the legislature about what steps we must take to ensure that we are better prepared when, not if, the next pandemic strikes.”

Twenty-five state senators and 100 state representatives took their oaths of office this morning. They spent a good chunk of the afternoon literally selecting their seats in the House and Senate, with the longest-serving lawmakers choosing first and newly-elected lawmakers last.