You are here: Home / Health / Medicine / Winter winds aren’t wicked yet, but pets still need TLC in the snow, cold 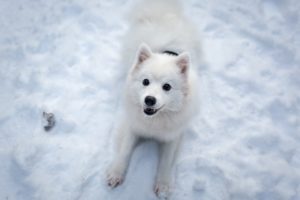 Iowa is fortunate to have only had a few bitter cold days so far this winter with wind chills of 20-below, but it’s still plenty cold for our pets, especially those furry critters that are used to living the life of luxury indoors.

Pam Wiese, with the Humane Society, says it’s vital that Iowans keep close tabs on their animals when they send them outside for a bathroom break.

“Set your timer for five minutes and check on them if you’re letting them out,” Wiese says. “Any longer than that, for dogs that are used to being inside, their feet get cold, they can get ice between the pads of their feet. If you leave them out for longer, obviously, even frost bite or frost nip can set in.”

“A doghouse needs to be big enough for a dog to walk in, turn around once and curl up, that’ll hold in the body heat,” Wiese says. “It’s a good idea to insulate it with some type of material that leaches water so that if they come in covered in snow or ice and it begins to melt, it doesn’t create a brick of cold below them.”

If you park outside or in a carport, Wiese says it’s important to remember the “whack the hood” rule before starting your vehicle.

“Neighborhood cats and free-roaming cats will often climb up into the engine of a car or truck because it’s warm and out of the wind,” Weise says. “That may be a place that they perch throughout the evening and they may fall asleep there. In the morning, make sure you wake them up and scare them away before you start your car. They can get caught in the fan belt and it can cause traumatic injury.”

Not only is the gesture kind to animals, she says whacking the hood could also save you an expensive car repair.