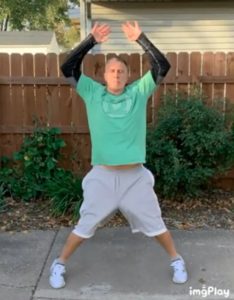 A screen shot from one of his “PE with Mr. S.” videos.

An eastern Iowa physical education teacher who makes exercise videos for his students on YouTube has gone viral and is gaining international fame — while helping kids and adults get fit during the pandemic.

Mic Siefert, who teaches PE at Madison Elementary School in Davenport, says it was a real blow when they were told during Spring Break last year that they wouldn’t be returning to class due to COVID-19.

“After I went through that initial shock and self-pity, I realized that my students and their families were going to be facing some very challenging situations,” Siefert says. “I knew I needed to up my game and find ways to engage students through new technology.”

He started producing videos in March, calling them “PE with Mr. S.” After building an initial following of three-thousand subscribers, his series of Christmas-themed videos during December caught fire, with some gaining 80,000 views. He got a voicemail one morning from a PE teacher in Italy who was in charge of international affairs.

“She reached out to me because she had shown my video in one of their webinars and a lot of the PE teachers really enjoyed it,” Siefert says. “She asked me if she could have the video and I sent her the video and she translated it into an Italian version.”

Siefert’s students assume he’s rich now, but while he doesn’t make any money from his videos, their popularity speaks to how schools around the globe are navigating the pandemic. Many of us are less active now and we have to force ourselves to change our regular habits to stay healthy. Siefert says he’s no different.

There are more than 40 videos in the collection on topics including how to make your own PE equipment, board games that incorporate fitness, and what he calls “app-smashing” efforts to find what exercise applications work for each individual.

Siefert says he’ll keep making the videos even after the pandemic is over.