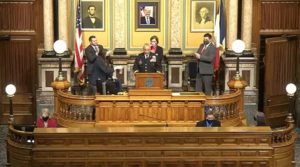 “The goal is to get them on the ground, out in the national Capitol region, by this weekend,” Corell said late this morning. “…We will send an advance party out hopefully today so we can get leadership on the ground so when our soldiers and airmen arrive, they know where to go, where they’re staying, where they’re going to be fed…and what is the mission that we’re going to ask them to do.”

The governor signed off on the deployment last night. Corell said the Iowa Guard members are being given time to notify their employers, say good-bye to their families and pack up their winter weather gear.

“It’s not a run at the sound of the guns event,” Corell said. “We’ve got some time to get set up and get people in place and taken care of in the right manner.” 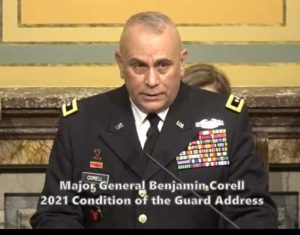 Corell spoke with reporters after delivering the “Condition of the Guard” address to Iowa legislators. Corell described a “staggering number” of domestic and overseas deployments for Iowa Guard soldiers and airmen in 2020. That includes 1700 who are still on duty overseas and over 900 Iowa Guards members called to pandemic-related duty.

“Not since the historic floods of 2008, has the Iowa National Guard played such a diverse role in coming to the aid of Iowans during their time of need,” Corell said.

The Iowa Guard has delivered 312 tons of food to the state’s network of food banks and pantries and soldiers and airmen are answering a hot line.

“The Iowa National Guard safely drove over 420,000 miles ensuring personal protective equipment was available to first responders and health care professionals across the State at the same time ensuring timely delivery of Test Iowa lab samples to the State Hygienic Lab,” he said. “To put that in perspective, that’s nearly 17 trips around the Earth without serious incident or accidents.”

Iowa Guards members have also helped with contact tracing and answering calls to a new hotline for hospitals looking for somewhere to transfer Covid patients. Corell said 400 Iowa Guard soldiers have been notified of deployments overseas in the coming months.

“I am extremely proud of all of our Iowa National Guard members and their commitment to help the people of Iowa during this challenging time,” Corell said. “The extended duration of this event and the diverse type of missions we conducted highlight the value of our Citizen Soldiers and Airmen to the State of Iowa.”

Corell asked legislators to maintain the incentives the state provides to Guardsmen who attend Iowa colleges and universities. He also reviewed plans for a new training center in the Des Moines metro.

After the speech, Corell told reporters the Guard stands ready to provide security at the Capitol in Des Moines, but state officials believe state and metro police will be sufficient.

“I do have National Guard forces that are trained, they are equipped and they are ready to respond within a period of time, once we’re notified, if events on the ground would require additional forces within the state of Iowa,” Corell said.

The FBI has issued a general warning that there may be armed protests at all 50 state Capitols, starting this weekend.

Corell told lawmakers that in the past year over 1700 Iowa Soldiers and Airmen were deployed to Europe, the Middle East, Asia and Africa.